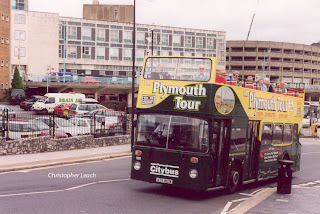 In later years East Lancs bodies gained a reputation for poor quality indifferent and even ugly designs. However I very much liked the bodies found on Plymouth's later Atlanteans which followed the even more attractive Park Royal-Roe NBC standards. From about 1980 pristine ATK160W No.160 looked very smart indeed on the Guide Friday 'Plymouth Tour' operated in partnership. Even more pleasing it was at the time at the end of the Nineties when so typical of Plymouth conventional Atlantean roar no longer competed in decibels with those greedy herring-gulls. Sadly with the demise of Guide Friday Plymouth stopped running open-top buses in summer which I feel is a mistake as there are wonderful views to be enjoyed down by the Hoe and all the way down narrow roads to seemingly far off Jennycliff beyond the greyness of the city.

Posted by christopher at 02:02