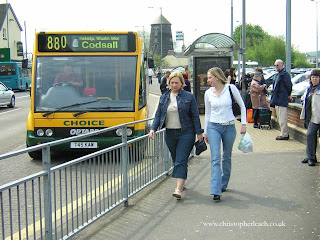 Even though I still haven't forgiven him for forcing the seemingly everlasting Arriva aquamarine on us I have nothing against Ray Stenning. But I have to say I'm not a big fan of his 'Best Impressions' in general which employ too many swirls, graphics and a palette full if ever so slightly horrid colours. Instead I prefer the simple approach, good clear uncluttered lettering and pleasing complimentary primary colours. Choice of Willenhall is just a memory now but they always stood out as being bright and clean looking, and better still even bright and clean looking when strictly speaking they weren't. Not everyone likes the Opare Solo but as low floor midi with easy access they are ideal for semi urban country routes like the Staffordshire County Council sponsored 880 which skirted Wolverhampton to Codsall to the west from Stafford. It now has been extended into Wolverhampton itself as Arriva does it now as the 88.

Posted by christopher at 03:17