5879: When Stafford went from Deckers to Saloons 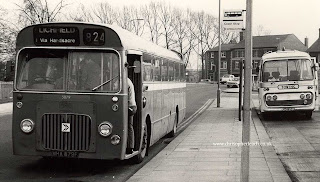 Till the late Sixties when the closure of Lichfield and Wolverhampton garages brought new bus types to Stafford taking the allocation from about forty-five to about sixty single-deckers had only played a small roll. Consequently from the last series of home build BMMO saloons S21-S23 5849-5991 only two arrived new Dual-Purpose S21 5866 and bus S23 5971. But the increased fleet and a need for 'OPO' brought a few more including the very first of what was something between a bus and a DP S22 5879 which had been new to Digbeth. More of interest to me was the former Yorkshire Woollen District tow bus from Yorkshire which was a rare visitor.
Posted by christopher at 07:43