DOC36V: Catch them while you can! 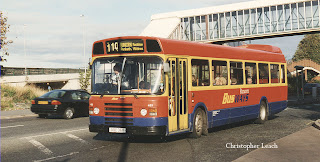 The Eighties was an interesting time as even though the big bus groups like First and Stagecoach were rapidly expanding to all appearances the industry was in a state of flux as it was sometimes difficult to tell what everything was. For instance to the untrained eye this former West Midlands National2 leaving Warrington might either be in the correct livery and have local branding for the Runcorn Busway or it could be one moved within what was to become Arriva but had retained North Western colours and the lettering was just a quick fix. It was of course just carrying local branding and I rather liked this bright distinctive livery soon to be subverted by that never ending aquamarine and sandstone.
Posted by christopher at 07:24