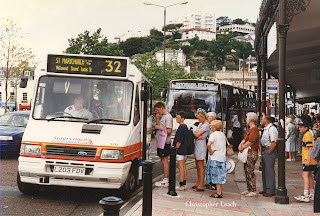 As older bus enthusiasts we all tend to live a bit in the past but judging by the lack of pictures here on Flickr few mourn the passing of the 'Minibus Revolution'  when even the humble bread van became the ultimate transport solution to some. Harry Blundred was the best known advocate flooding Pompey and South Devon and parts of East London  with the often unsuitable things. There were even dual-entrance Iveco Transits like this and had his eccentric empire not tumbled we might almost have seen the double-decker version a  Ford Transit too! Fortunately when Stagecoach took over the more sensible mix of types reamerged but not too surprisingly some of the newer oddities lingered on long enough to carry those also not too missed Stagecoach Stripes.

Posted by christopher at 04:12

You have shared a great information.