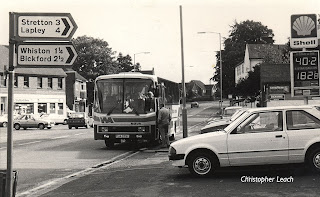 Some Wallace Arnold tours used to call in at the sprawling village of Penkridge at  lunchtime for a bit of refreshment, and the angular lines of the first generation of the Bovas certainly suited their chunky graphics and livery. The Europa of which WA had fourteen gave way to the much more stylish Futura. I wouldn't pop down there for a top-up, fuel has gone up a tad bit since the Eighties and there would be no point planning to park your truck at the most famous landmark 'The Sunset Cafe' either because that has long gone as have most of the lorries which hurry passed on the busy M6 almost within earshot. Indeed even that most familiar and pleasing sight a Warstone's 'Green Bus' elderly Leyland is very much the past. But believe it or not people still flock here from far and wide as there is a twice weekly traditional outdoor market.
Posted by christopher at 02:35