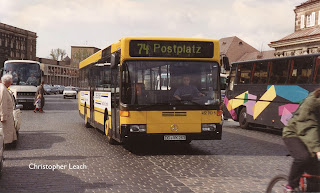 Well actually just yesterday as National Express West Midlands still run them in Wolverhampton as they even reached the UK. Being 'N-Reg' they are getting very old but it is not that long ago that they were still running Mark1 Metrobuses so they don't give up lightly on good buses. But once they were everywhere in Germany but now I imagine they are scarce in the wealthy EEC countries finding new homes a few years ago in the less prosperous economies to the East and in the Balkans still trying to catch up and unable to afford new ones yet. Of course we took these rather square Mercedes-Benz buses very much for granted but my friend at the Die Post in Switzerland told me they were a very reliable bus and yes I quite miss them as they were pleasing to ride on. Fortunately unlike many buses today at least they came in different colours too and this yellow example was seen close to the Bahnhof in Dresden in about  1996.
Posted by christopher at 14:54

I found O405s still at work in Germany this summer. I photographed them in August in Koblenz (an example each Transdev and one other operator) and Karlsruhe. Two more cities to be added to my blog in due course...

Thanks for that Malcolm, I'm glad you are still visiting. I've got a bit of a blogging bug at the moment so I'm managing to keep up with my scanning and posts. I haven't been to Germany for a couple of years so I had to make an educated guess about the 0405 bus population but there cannot be that many compared to their heyday abundance.

I can't say I've spotted many O405s in my recent trips to Germany - most of what I see are either MAN Lion's City or Mercedes Citaro. The occasional surviving O405 does add interest, not least because they do appear to be getting more scarce. I was quite surprised that one of the O405s I found in Koblenz looked to be step-entrance.

As well as Koblenz and Karlsruhe, I did find a couple of articulated low-floor examples at work in Köln (what is it with O405s and cities beginning with K!) last December - there are a couple of images amongst the Citaros on my post from that trip. Whether they are still in service now, nearly a year later, I know not.

I must admit the once ubiquitous Leyland National Mk1 didn't make me want to groan quite so much once they started to become less common and especially when the mini-buses that often replaced them weren't 'even' what I like to think of as buses. Also of course Nationals were a bit more photo-friendly in non NBC colours, indeed to do a full circle some were even painted yellow.