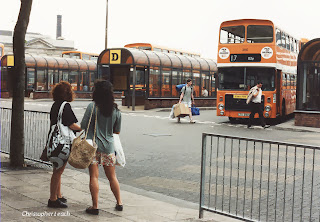 Let's be thankful that the city planners in Cardiff haven't yet moved the bus station to somewhere where it is 'more needed' and then they could build a beautiful shopping centre under that multi-storey car park for all those more important car drivers who don't use the bus or train. Fortunately greedy local politicians and speculators don't always get their way. Sadly when I was last there in 1992 so much had changed since the days when nearly everything was shades between red and brown. Still there were still things of interest including CTX390V a less common combination of Alexander bodywork on a Bristol VR. As for the girls they would have teenage kids by now or even be grandparents!
Posted by christopher at 01:51