WHat did Santa bring you? 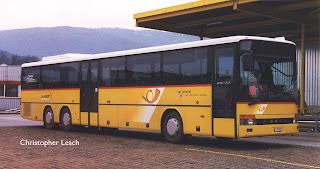 Nothing quite as big and exciting as this. At the start of the Millennium the Swiss PTT was replacing it's old 'lock-up style' garage units at places like Delemont in the Jura and replacing them with the sort of facility that can cope with something a lot bigger than the old bonneted Saurers whose size was often restricted by the strict size laws of the canton where they ran. However as well as the alpine passes I don't suppose this massive Setra beast would have been happily weaving it's way between the badly parked cars on the Swiss equivalent of Wednesfield's Ashmore Park Housing Estate either.
Posted by christopher at 04:00