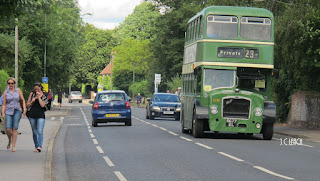 A former Hants and Dorset ECW bodied Bristol Lodekka of 1961, and even though the Tilling fleets had more to make them similar than their BET counterparts each company had it's quirks and on 1450 we can see the canopy sun-visor over the windscreen. Orange on black was Woolston on the edges of Southampton.
Posted by christopher at 05:13