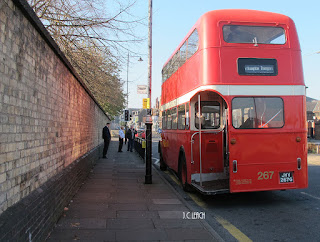 No not exactly a compliment but going back to the Thirties and War Years the angular profile was hardly inspiring on double-deckers. However for those with a trained eye many later more rounded designs may not be beautiful but they have a pleasing subtle functional elegance like the rugged Roe body on this former Northampton Daimler CVG6 whose significance is that it was the last example built JVV 267G No.267 in 1968 and seen here at Lincoln.
Posted by christopher at 01:32