Trying to Dodge the Dodges in Plymouth 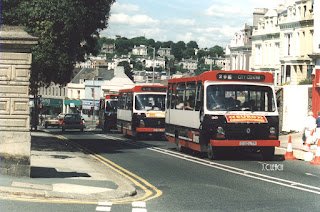 It was very difficult to Dodge the Dodges for minibuses seemed to have taken-over every town but today it seems hard to imagine how chaotic it was during the minibus boom or just in some cases almost madness. Perhaps it was a cheap quick fix with rubbish wages and low paid young drivers but there were successes too as the small bread vans grew bigger till midi-buses were replaced by full-sized vehicles again but at the same time the rapid frequency of buses was cut back and the old status quo returned to previous frequencies.
Posted by christopher at 14:47