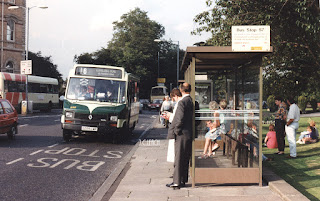 When I took bus photos in the Nineties I suppose I took half of them out of interest and the rest as photographs which meant I didn't discriminate too much. But looking back that was no bad thing as I don't think I would have bothered much with minibuses out of choice like this Renault or even perhaps a Renault-Dodge in York. Still  they all have their place in history show off their livery and no doubt some may  miss them perhaps if they grew up with them and they caught the imagination or enthusiasts bug.
Posted by christopher at 03:15