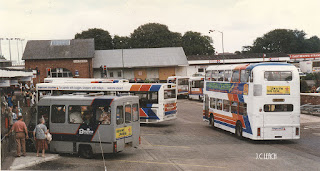 Stagecoach was quick to make it's mark when it took control of Harry Blundred's 'world of minibus madness', and a few still in evidence including a Ford Transit in 'sunny' former Bayline Grey with I think with if I remember rightly very appropriate registration letter NOD for Noddy lol. Of course Devon General had till not so long ago plenty of Bristol VR's and  they had to be reintroduced. JUB 650V starting life with West Yorkshire so I'm not quite sure how it arrived in the Stagecoach arena. Not visible but also in the bus station was the Leyland PD2 open-topper and as I had a day ticket I kicked myself later for not getting off to take some photos here, maybe it was because I felt happy because I had bagged the seat at the front upstairs. But a couple of trips later to Devon and I finally tracked it down in the depot yard at Exeter as it had been withdrawn after Stagecoach stopped doing an open-top tour of the city. Just in case anyone wants to catch me out there were still some VR open-toppers in Torbay but even long trunk routes like that to Plymouth were entrusted to cramped little Mercs.Wasn't Blundred formerly a Bus Conductor? perhaps he had a phobia about big buses as he hated having to keep going upstairs.
Posted by christopher at 14:52