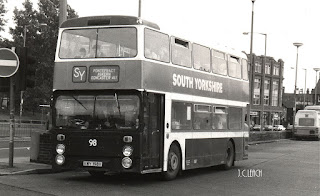 South Yorkshire of Pontefract was an Independent with a modern bought new fleet which had a bit of character and commanded a lot of respect. Sadly the blues and white in the livery didn't wear terribly well and the buses could have looked a bit smarter which was a pity. Sadly they are another one that succumbed to the Arriva empire so I prefer them the way they were. These low-height Northern Counties bodies on the Daimler Fleetline were simple and attractive though like No.98 seen in Leeds on the main route to Doncaster.
Posted by christopher at 08:29