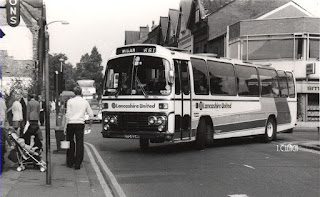 Lancashire United had quite a varied fleet but the Leyland Leopard seemed to be favored for coach duties such as this Plaxton Supreme bodied example here in Wigan in later years when under Greater Manchester ownership coaches wore their variant of the 'family' image which was greatly removed from the old sober red and grey.
Posted by christopher at 07:29