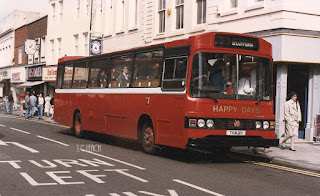 As long as I can remember I have rarely seen any former Maidstone and District buses operating into Stafford. In BET days they operated about 800 buses but by contrast the town of Maidstone itself with just fifty was much better represented for as well as Stevenson's snapping up a bunch of Massey bodied Atlanteans when no doubt a new general manager decided to go for lightweights these lasted even fewer years and a couple also ended up working into Stafford for Happy Days. Of course the Massey bodied Atlanteans were almost unique to Maidstone and Colchester with one with A1 in Scotland, but even though this type of Wadham Springer body was quite common on military and police buses etc they were not usually found that much on proper PSV's. TKM 111M looked smart and Ron Jackson who is often at the wheel of preserved PMT TVT 128G was driving it. As well as working here, he did PMT Midland Red and Arriva.
Posted by christopher at 01:10