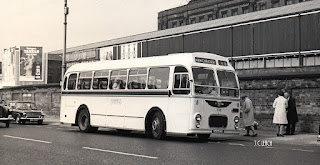 I told them but a trick EFE missed for a nice model was the Sheffield JOC Leopard with ECW MW style body. The only combination of the two it was these quirks that made being a bus enthusiast interesting in the Sixties. Coach seated the three buses did the longer services as seen here in Manchester. It was because the JOC was partly owned by British Rail that the Corporation had access to the nationalised sector products.
Posted by christopher at 23:59