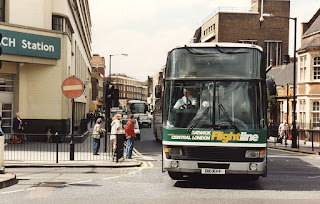 It's a shame the Berkhoff bodied Leyland Tigers of London County had such short lives in that guise before most were rebodied as buses for new lives elsewhere as they were rather impressive coaches. But Deregulation and the sell off of the NBC turned the bus industry upside down; no not literally but who would have guessed all the things that might happen in the coming years. It might have changed quite a bit over the years but thankfully Victoria Coach Station is still there and they didn't just pull it down an move the coach terminus to some draughty and  cramped glass affair in Brent Cross or Golders Green or somewhere stupid like that.
Posted by christopher at 00:43

I did like those Berkhofs. They had more presence than the Plaxton Paramounts of the same era, looking much more sophisticated (at least to my eyes).

A shame that they were lost so soon, but the days of the "Local Express" services such as Green Line and the Midland Red companies Midland Express branded services were numbered. Today there are so few of those routes left, and those which have survived are operated by buses rather than coaches. :(

You are right Ross just a few commuter services out of London etc, not even enough limited-stop more direct bus services either to shorten the journey although West Midlands does not too far away.