New Olympians mark the end of tradition at Chester 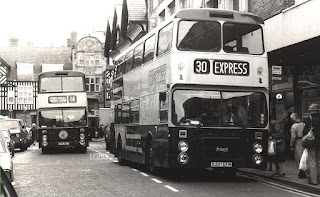 I certainly miss the chocolate brown Chester  buses which suited the city so well along with the Tilling Green of Crosville. The Coropration favoured Daimler Fleetlines for many years and then bought Dennis Dominators before as usual with Northern Counties bodies a few Leyland Olympians. Following Deregulation survival became harder and purchases were often geared to the quick-fit of the second-hand market so instead of continuity variety became the order of the day, interesting but a bit depressing at te same time..
Posted by christopher at 03:14