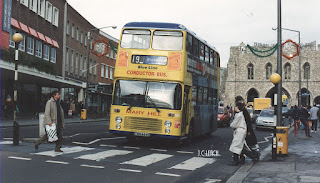 In the competitive days after Deregulation operators tried all sorts of tricks to gain fares including in some places the return of the conductor. With the public in mind the still ever popular London Routemaster was very much in demand for this but more modern 'OPO' type buses appeared too like this former Ribble ECW bodied Bristol VR of Solent Blue in Southampton where CityBus were using them along with it's 'heritage' very last AEC Regent.
Posted by christopher at 11:44