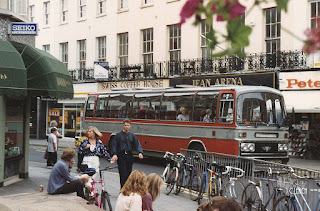 Not all my pictures come up to standard and this one taken in Cheltenham was badly spoilt by the railings. Once upon a time grey and silver based liveries were quite common but as well as Marchant's, Abbott of Blackpool used a similar scheme which appeared on their Plaxton Supreme bodied AEC Reliance coaches too.
Posted by christopher at 07:30