HT Buses on the move in Copenhagen 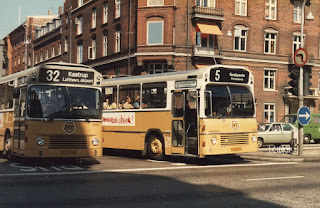 These two buses were very typical of the Copenhagen HT fleet in the Eighties. The Leyland DAB's were to be found closer to the centre and this style of Aabeneraa bodied Volvo B10M had been the choice for the outer district, but later deliveries joined the throng too. 1432 was new in October 1981 and 1062 December 1979 and both are heading for the island of Amager over the bridge.
Posted by christopher at 02:06