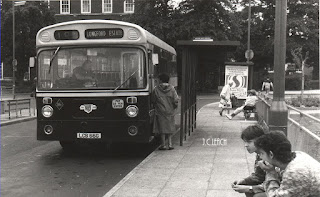 If one had to pick a typical Green Bus single-decker it had to be one of these East Lancs bodies which appeared on Leyland Leopards and as here on a former Blackburn Tiger Cub. To myself it seemed a bit strange really as by now they had an antique quality but when devised in the Sixties this was perhaps the Municipals ultra-modern equivalent to the BET same at both ends bus and added to their air of freshness many Corporations opted for a brighter livery combination pioneered on the Bolton buses where it started when GM Ralph Bennett was there. In two shades or green and cream and sometimes with red wheel trims and of course rather old fashioned sign-writing Warstone's livery was refreshingly well out of step by the Eighties
Posted by christopher at 15:23