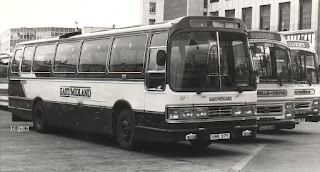 It would appear from this view taken at Bretonside in Plymouth that the East Midland Leyland Tiger had travelled a lot further than the two Volvos alonside it and in summer there was always a nice mix of local traffic and more exotic coaches from places like Barnsley and Wigan. Catch the light right and it was good for photography too but in later years as elsewhere one was reluctant to walk on the parking area although I never heard anyone say anything. They are a bit more laid-back in the west Country. No.37 was one of a pair of with Duple bodywork.
Posted by christopher at 01:28