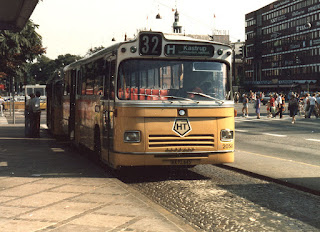 It must be an age thing but often when I visit a place it's the oldest buses that catch my eye and gain affection. These DAB Leylands were nicely rounded and some dated from 1964 with examples still in service in 1982 from 1967. However 2054 was one of the last examples of this family of similar buses dating from October 1972 which went as far as 2058. However some had a bit more time as thy were being repainted.
Posted by christopher at 03:26