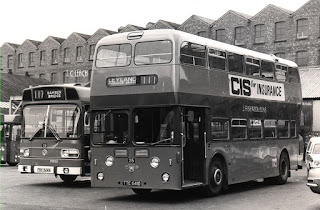 Even well established Independents like Fishwick have come to grief as in today's economic climate as it is often the less scrupulous 'entrepeneurs'  who can squeeze a bit of cash out of the system,  but we will miss the old school and sadly their now obsolete buses. Being based in the same town it was hardly surprising that Fishwick was one of Leyland Motors best customers. No doubt they picked up a few bargains like former demonstrators but they did seem buy both the good and bad. The early low height Atlanteans have gained a poor reputation due to design faults but nevertheless many lived out long busy lives lasting as many years or more as many a highly regarded Farringdon bodied PD2. So no the this was hardly Leyland's worse bus or coach but Fishwick's did seem to embrace those duds too like the Lynx even if they were inferior designed Lynx produced when Leyland put it's money into it's not so wonderful cars instead.  No doubt it must have realised there were better buses on the road but sadly misplaced loyalty can cost you dear as they say!
Posted by christopher at 16:25