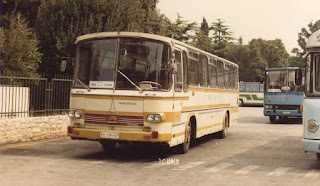 Not very exciting but a bit different nonetheless were the buses to be seen in the former Yugoslavian city of Pula which is much more famed for it Roman Historical remains than it's much more mundane German influenced bus scene Still where in Britain can we find a bus station overlooked by a Roman amphitheatre. I rather liked Magrius Deutz buses though they have that  quirky small manufacturer feel about them, a bit rough and ready but thoroughly reliable a bit like our own Foden's used to be.
Posted by christopher at 02:19