Outer London: Routemaster RM 132 at Cheshunt on the 279 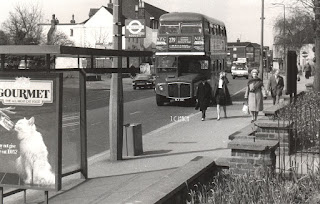 Believe it or not I simply felt I really needed this photo of  a Routemaster as I thought their days were numbered. Taken in 1980 I shouldn't have worried should I as they would soldier on in number for quite a few more years, indeed the extra stint would equate to the lifetime of most more ordinary buses. However some especially the RML's might have served the capital for fifty-years but  it was still not such a bad thing that I got this shot as their range in the forthcoming 'opo' double-deck era would  relegate these crewed buses to basically a more Central London range. Yes they still would come a good way out but not as far as Cheshunt which was near outer the boundry of the London Transport  'red' area. Although carrying a newer body RM 132 was an early example bought for trolleybus replacement and worked at least from  Poplar Garage before coming to Edmonton which did the lengthy 279 seen here taking it to Smithfield Market.
Posted by christopher at 16:45