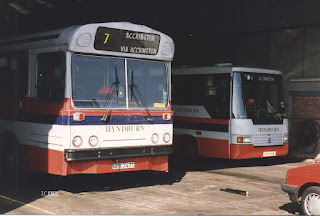 Accrington Corporation buses really stood out and could look magnificent in that  most unusual dark blue with red relief livery. This prevailed until it's demise but in later years it was 'brightened up' as can be seen on the East-Lancs bodied Leopard and Wadham Stringer bodied Swift. By the time I took this photo the fleet was looking shabby and there were no new buses just secondhand purchases to cope with the difficulties following Deregulation. Here even the yard gates were kept locked to stop travellers stealing the diesel.
Posted by christopher at 13:57