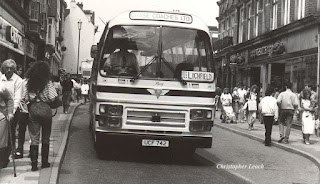 How times change as these days it's seems most odd to think of traffic going down the main street of Stafford with all those milling pedestrians jostling for space. Of course there were no mobile phones then to distract their thoughts as they stepped off the pavement but one wonders how so few people got run over in an age where there was no health and safety nonsense to keep us safe. Well I always joked that if I was to be run over by a lorry it should be a Foden but heaven forbid should it happen one could have done worse than go under an AEC Reliance Plaxton Supreme coach like this one which served with Chase and was competing with MRN on the Lichfield service. I suppose there is a lot to be said for safety regulations but it is most annoying as it treats people as though they were both stupid and accident-prone.
Posted by christopher at 13:38