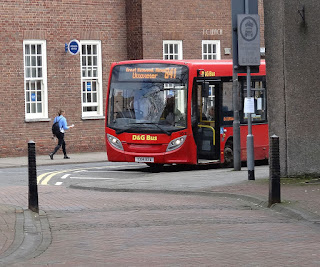 Since D&G took over the 841 Stafford to Uttoxeter service five years ago they have given us an excellent service and not only did they raise the frequency from two-hourly to hourly for a lot of the day on some journeys the buses are fairly full. But now the contract has come to an end Arriva wants it back and has registered it and as they will be running it without County Council support they can run it as they wish. At the same time they will take over the 842 which also went through the Heywoods but via Sandon and Hopton for Rugeley. They have merged the two routes together going as far as Weston and then heading for Hixon cutting out the Heywoods altogether which means both 841 and 842 passengers will have to use the 825 instead which goes through Milford. Rumour has it that Arriva is fattening up it's portfolio of services in anticipation of take-over bids as it's owner DB wants to sell it off so that the money can be invested back in Germany on the railway. I know they re not perfect but I would like to see Stagecoach take over Arriva Midlands as at least they use some initiative and market research to make the service better instead of just raising fares all the time and cutting routes, but even though such an outcome is being mentioned it seems Stagecoach don't want Cannock Garage. With most of the Cannock routes serving the conurbation and a mixed urban and rural landscape in a working class district this should be good bus country but I expect it doesn't want to have to deal with Staffordshire County Council who admittedly is strapped cash but also seems to think everyone should own a car and add to the pollution and congestion we all so much enjoy.
Posted by christopher at 02:03

In relation to merging of 841 and 842 services in Stafford, would you mind telling me where this information is from (as I can't seem to find anything on either Arriva, D&G, Staffordshire County Council, or Traffic Commissioner websites)? Thanks. Also, do you know when the changes are due to come into effect?

No it hasn't been made public yet but I gained this information from talking to one of the drivers. But the information I gave is a little out of date as D&G have retained the Uttoxeter service but now missing out the Heywoods. As it takes longer than a hour it needs three buses instead of two and I don't know how often they will run but part of the old 841 now numbered 4 will still go down the Tixall Road as far as the Crem to serve the new housing developments and then cut across to the Weston Road coming back passed the hospital. Anyway that's what I've been told.

Thanks - that is very helpful