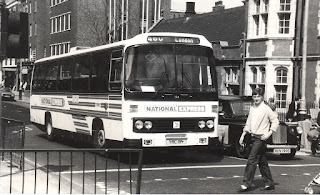 I've always admired Trent for the smartness of it's fleet which even extended to the unpopular shoddy Willowbrook 003 body. This Leopard in London even gained a cherished marque perhaps the owner hoped people might think it was older than it was lol. Even though it was not officially allowed even then drivers openly smoked even when they were likely to be seen by officials. Today of course it is quite different but one still sees a few drivers of commercials who smoke, not so much lorry drivers but tradesmen who are breaking the law if others use the vehicle as well. But with police resources so stretched it is one of those laws which is left up to management to enforce as the police have better things to do.
Posted by christopher at 00:21