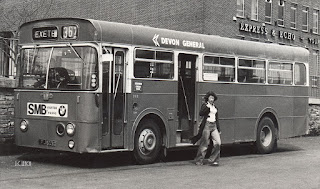 I don't think this was planned but things were very different in 1980 when Devon General buses at Exeter Paul Street Bus Station just parked up and passengers walked across the bus lane. Of course accidents were rare as people used their common-sense. The Corporation like many County Towns seemed to like Massey bodywork and this was one of six bought to replace elderly Daimlers on it's share of country services which it worked alongside Devon General.
Posted by christopher at 04:34