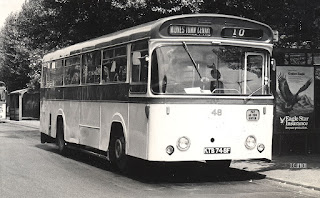 Widnes Corporation or as it had now become had been one of those very conservative operators which continued to buy the same buses and in this case traditional half-cab East-Lancs bodied Leyland PD3's with an eccentric just one opening vent at the front on the top deck. Maybe it was a change of general manager but fleet replacement policy turned to the single-decher instead. Of course it might just have been simply the desire to convert the system to OPO but nevertheless even though they looked a lot more modern the first of these buses were still  were still East-Lancs bodied Leylands
Posted by christopher at 04:34