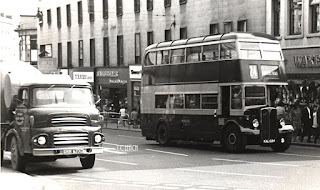 I think if one had to choose the most interesting and varied city for buses in the Sixties Nottingham would be near the top of the list. If one had to find an area where it didn't excel it was perhaps in that it was only served by two Municipals. Having said that they were both interesting for whereas the city itself was very innovative the small brown and cream fleet at West Bridgeford was for many years very conservative and when this Park-Royal bodied AEC Regent 111 was seen here in about 1968 was already twenty years old and had a 'rathergrand' pre-war feel about it.
Posted by christopher at 16:40