Leicester Buses of the Sixties and Seventies 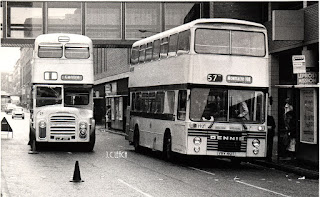 A comparison of buses from the Sixties and Seventies here at Leicester, a 1967 MCW bodied Leyland PD3 and an East-Lancs bodied Dennis Dominator of 1979. Not that it had any complaints about it's faithful old  half-cab Titans but dissatisfaction with the Leyland regime at Leicester led to birth of the Dominator which helped the once familiar Dennis company to re-establish itself as a key player.
Posted by christopher at 01:58