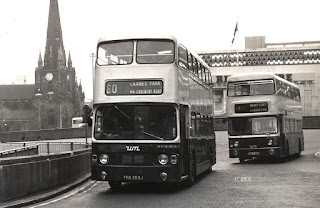 Most of Midland Red's final batch of Daimler Fleetlines went to garages in Birmingham and the Black Country and consequently found their way into the West Midlands PTE like former 6263. These were delivered as dual-entrance buses but this seen at the Bull Ring had had it's unpopular centre-exit removed. It was easy to tell the former Midland Red buses as they had Alexander bodywork whilst the Fleetline following by local MCW was the norm.
Posted by christopher at 15:37