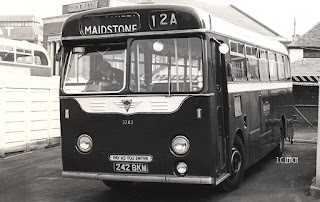 The BET companies all had similarities which gave them a family feel but at the same time they all seemed to be different as managers were given their say. Hence firms like Maidstone and District stood out as they bought batches of unusual buses including locally built Beadle bodied Reliances buses and from Hove more similar AEC's with attractive Harrington bodies which also appeared on another rarity the Albion Nimbus. Having not long been renumbered from S242 to 3242 a driver fills out his Waybill having just returned from on probably the 12.23 from Grafty Green.
Posted by christopher at 03:29

Always delighted to see a bus local to me amongst your postings, though rest ssured I enjoy seeing all of them, from both the UK and the continent - thank you.

I always enjoyed the pre-NBC M&D, East Kent, and Southdown fleets. As a kid, I had relatives in Cranbrook and Goudhurst and loved exploring their operating areas.

Thanks for your comments, yes I try to mix them up a bit but this was my era, I spent almost a year in Maidstone at the Art College. Interesting time too with the M&D renumbering, the last NC Fleetlines, new Strachens Panthers, the first Duple Leopard coaches plus the last East Kent Regents arriving and amongst the old stuff
Maidstone still had three Daimlers.