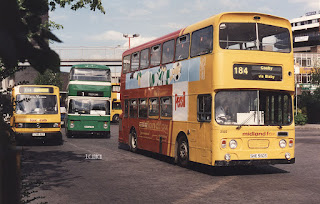 A pair of Daimler Fleetlines kill time between duties at Leicester. The Midland Fox livery was bright and cheerful in yellow and red which was popular at the time. I cannot help thinking this later 'Liverpool Inspired' later version of the classic rounded design was not an improvement as seen on this former South Yorkshire example. However I concede there was less expensive curved glass to replace and the angular lines and peaked bulkheads were fashionable at the time.
Posted by christopher at 02:03