Gmpte Fleetline 4610VM in Stockport on the 192 from Manchester 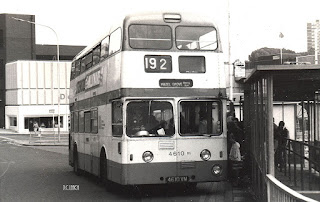 I don't know about other people but certain buses have a romantic connection which leaves me with a soft spot for them all their lives. A very good example is this first batch of Manchester MCW bodied Daimler Fleetlines which arrived in 1963. That was a year that changed my life and also I had a pre-girlfriend crush on a girl called Imelda Daly who lived on Derbyshire Lane in Stretford on the 11 and 23 routes on which Princes Road's examples worked. Actually I don't think this was one of them as if I remember rightly I'm thinking of 4600-4609 whereas this one was at Hyde Road. It was a long time ago so I might be wrong and the girl too was just ten in my mind is probably a blooming teenager now.
Posted by christopher at 01:53