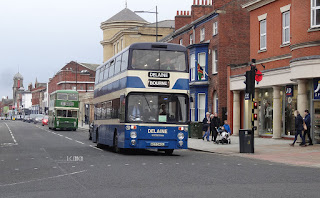 Better late than never! Some people rush home after a day out and immediately put all their new pics on here. I would rather put one on at a time and completely mix them up which means some of my buses keep you waiting or not come on at all. That is made slower as I have another problem and that is I still have the free but limited size Flickr account. I also like to bring back some I've had to delete and I had thought about a PRO account but apart from taking things out of groups few people would notice as few really rummage far beyond the first page or so. The Delaine Northern Counties bodied Atlantean was as always beautifully turned out but I want to write about the Lincolnshire VR as I've ridden on it a number of times. Indeed in 2019 not only did I do it again at the LVVS running day I could have bought a model of it too. At one time I might have snapped it up as not only have I just only got one other Bristol VR in my collection, Lincolnshire is one of less than half a dozen sizable BET and BTC operators which I don't feature in my collection. It wasn't expensive either and I felt a bit churlish coming back with nothing but in another way I'm pleased as I made a decision to virtually stop collecting discasts as the shelves are almost full and I've stuck to it!
Posted by christopher at 03:05