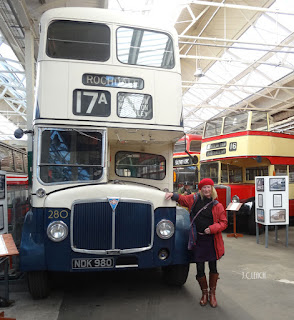 I recently visited the North West Museum of Road Transport on their annual running day and was very impressed as it was clean and well laid out and housed a lot of the local buses buses I so remember from thereabouts. Rather as happened at West Bromwich, Rochdale buses once looked their best in the traditional livery like this. No doubt they chose a simplified mostly cream scheme as it was cheaper and easier to maintain but  it was dull in comparison. I also expect Rochale made this change in the early Sixties because of the advent of spray-painting but thankfully the West Midland's corporation left it till they were about to be taken over by the PTE and only some new Fleetlines got the poor treatment. These two buses mean something to me though as my family was from Manchester and on the destination of this AEC Regent is Blakeley and it was such a dump my Grandfather used "Go to blakely." as a form of mild abuse. Southport not only painted it's buses in that attractive red and cream but the lamposts too and as I have strong family connections there too it brings back early memories of childhood.
Posted by christopher at 01:31

Regent, Titan, and Jojo, all looking good.
As always, a big thank you for your almost daily updates and wonderful photographs, old and new.

Thank you Mick, yes as you can see it's Jojo in the drivers seat here.