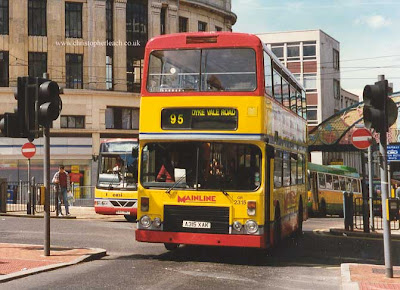 Although the Municipal Sector liked the Dominator as it was their kind of bus giving them a much wider choice of engine and bodywork options than the megalith British Leyland which had become rather dictatorial it still did not sell in great numbers compared to the competition and that included the MCW Metrobus. The South Yorkshire PTE though was it's biggest customer by a large margin building up a huge fleet of Alexander R-Series bodied buses. However there were also some by East Lancs and a smaller batch of ten buses including No.2315 carrying Northern Counties bodied caught hurrying through Sheffield and carrying the code GR to show it was allocated to Greenland Garage in the city
Posted by christopher at 14:14