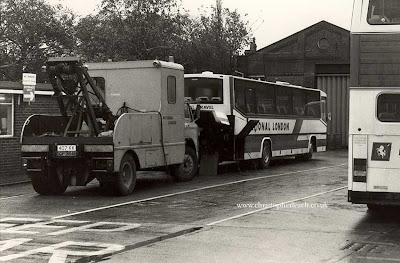 On this auspicious day, Friday Thirteenth I look through my files looking for bus mishaps and breakdowns. Today I've found you quite an interesting view of a failed Bova belonging to National London and based not too far away at the old Timpson's coach depot in Catford. The location is the large Maidstone and District garage at Gillingham. Of interest though is the breakdown vehicle for as spotters of London Transport will no doubt recall in the back of their Ian Allan ABC British Bus Fleets were pages of these service vehicle, most were rather mundane like this Ford D-Series but others in green livery for all manner of duties including gully emptying were far more historic and lurked in sheds and Underground Railway Depots. Indeed trying to spot these too was one of the reasons cited for trying to sneak around bus garages as some of them ventured out hardly more than the bevy of tantalising dusty withdrawn RT's or RTL's stored down at the back which if we didn't get them on that occasion they would be gone altogether soon.
Posted by christopher at 12:41