No it's not Sunday in Reading 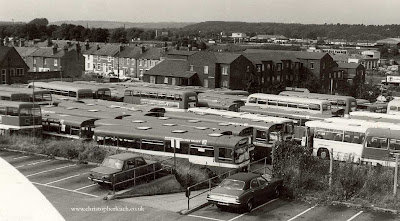 In the early Eighties a bit like with Doctor Beeching and the railways the National Bus Company undertook a nationwide survey of it's network. Of course the effects of the Market Analysis Project (MAP) did not necessitate the pulling up of the roads as well but it did rid a lot of fleets of all their slightly older more interesting buses. Alder Valley was a good example as the former typical BTC Bristol/ECW operator Thames Valley merged with it's more charismatic former BET Group neighbour Aldershot and District. But after MAP there were no AEC Reliance buses or the locally Guildford built Dennis Loline left. Instead it was just the poppy-red Bristol VR, white Leopard Coaches and of course the ubiquitous National. The collection area for unwanted stock was the large yard beside Lower Thorne Street Garage with Bristol RE's very much in evidence.
Posted by christopher at 06:20

A friend and I once skimed, eh, took a minor detour that is, of our school cross-country run to visit this site. I can't recall the exact year but it must have been in the mid 1980s. There wasn't as much to be seen as on your photograph though. But for an imüpressionable schoolboy even a handful of fairly normal buses were something worth seeing. Thanks for sharing.

And there were one or two gems in there too and I have other one or two closer views too to come at some time. thanks for your comments Andrew, I knew you would like this one.

and a wartburg on the car park

Yes Wartburg cars were quite common in the Uk but not as numerous as the LADA and Skoda.