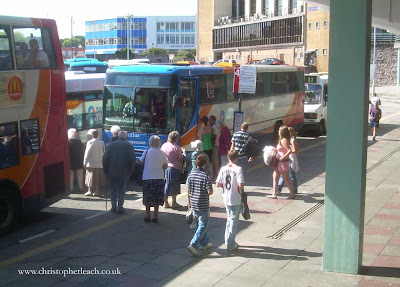 Even though Plymouth Bretonside Bus Station has rather a forbidding reputation as a hang-out for drunks and vagrants especially at night, during the day at least it is a great place for bus photography. Not only is the sun usually in the right position there are any number of places to get decent views including panorama shots like this and what's almost becoming a rarity one can snap away without the Police arriving to ask what you are doing. Stagecoach buses on former Devon General routes are something of a minority as this is very much First Group territory but as before they still depart for Torquay and Exeter like this plaxton bodied Volvo.
Posted by christopher at 03:44