A quick one outside The Tate 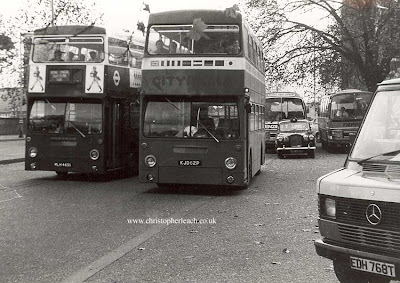 It's always easier to pull up somewhere one shouldn't in a van as you can always say you stopped to ask directions. I expect it's even more difficult to get away with it now in London where one of the vast army of over-eager traffic-wardens appear from nowhere desperate to build up their weekly tally of fines. So I don't really miss distance driving any more but back in the Eighties my van often found itself in views too for a quick photo parked on double-yellows. This pause taken outside the Tate Gallery was to record the two Plaxton bodied coaches belonging to the well known operator's Tappin's of Wallingford, Oxford and Kenzies from Cambridge. But in the end I snapped these two passing DMS Class Daimler Fleetlines, one still with London Transport as DMS 469 whilst the other was in the blue and flags livery of sightseeing operator Cityrama.
Posted by christopher at 02:41