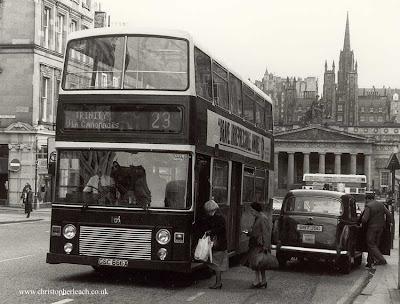 If one is superstitious this might just be a bad bus anyway as it bore the Devil's 666 number. Another couple of reasons for it's unpopularity was that not only was it destroyed by fire but of more concern to the local economy was that after buying these it's first two trial Leyland Olympian buses horror of horrors the Scottish Capital's fleet of Lothian went to ECW in England to body a large order whereas most had logicaly presumed the bodies would be built by Walter Alexander nearby at Falkirk like the hundreds of previous Edinburgh Atlanteans. No doubt Eastern Coach Works won it as they could produce them at a lower cost or promised quicker delivery. One of those two-door buses can be seen in the background heading down Princes Street, but might I add Edinburgh's loss was our gain as in the immaculate local madder and ivory livery they were probably the most attractive examples of that type to be found in service anywhere.
Posted by christopher at 15:32