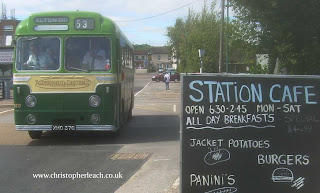 Look back over the Summer I had some good days out including this one to Alton which was the furthest bus trip I took with my friends in their preserved Midland Red Leopard JHA227L. This town once had one of the four Aldershot and District garages so not surprisingly the former BET Group company was well represented here with both Dennis and as you see here AEC buses. Most of their AEC Reliance's had Weymann Hermes bodywork like this example No.370 Reg. XHO370 from 1960
Posted by christopher at 05:43